You Are Here: Home → About Us 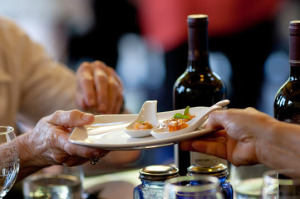 Sebastien Caillabet’s culinary adventures began while growing up in Ireland, where he developed an appreciation for fine foods. His family comes from a long lineage of chefs and restaurateurs specializing in all kinds of cuisines. It was in his father’s French restaurant that he developed a taste for traditional Irish smoked salmon, always a staple on the menu.

At 16, Sebastien started as a “stagier de cuisine,” spending summers working in the kitchens of well-known restaurants throughout France and Ireland. Similar to modern-day apprenticeships, he worked his way up from washing dishes, chopping parsley and de-bearding mussels to actually working the lines and preparing food. He then moved to Los Angeles and continued working in restaurants while attending school. For the next 18 years, he worked in the Hollywood film industry as a special effects technician. It was here he met the love of his life, Stephanie.

After moving to Austin, Texas in 2003, Sebastien continued to crave the silky, fresh-tasting smoked salmon he enjoyed as a young boy back in Ireland. He searched unsuccessfully throughout Central Texas, finding lesser-quality smoked salmon filets, frozen and filled with additives and preservatives.

Soon he began smoking and curing his own salmon, always a treat for family and friends.

In 2011, he turned his passion into a career and opened Celtic Seafare, an boutique-style company in South Austin. He maintains the high quality of sustainable sourced Atlantic salmon by smoking hand-selected filets in small batches. He began distributing his delicious products to a group of local chefs, as well as directly to customers at farmers markets throughout the area.

The Austin community has embraced this Irish delicacy and a loyal customer base has grown, including many Scottish, Irish and English folks who enjoy a delicious taste of home. In 2013 Celtic Seafare was moved to a larger building in Dripping Springs, located just west of Austin.

This summer they plan on opening a new gourmet American deli just west of Austin. www.loxboxandbarrel.com

Sebastien and Stephanie pride themselves on being members of the community where they work and are happy to share their family’s special tradition.